You can imagine with a blog like this one that as an author I want a way to write new posts that is both easy and fast.

Macintoshhowto.com is run by a piece of software called WordPress. WordPress is a little bit clunky and so there have been several attempts to write software that will simplify the blogging process and automatically upload your post to WordPress.  Over the past few weeks I have  trialled various pieces of blog writing software and here’s what I found.

Based on various reviews the first software I tried was Blogo. Looks nice but too many problems. I used it for about 10 minutes and here’s what I didn’t like:

When you drag in an image into blogo you can’t see the image in the article, you just see a logo showing there’s an image there.The preview didn’t work, it had lots of mistakes.Blogo crashed losing my first post before I even posted it! FAIL.

The next cab of the rank was Mars Edit. Worked OK but I spent too much time working out how to edit things. Not easy or intuitive. I gave up after 10 minutes. It doesn’t have the easy-to-use Apple feel.

Desk had some great reviews and a fantastic website. Sadly there’s no demo version, and I’m not game to spend $29 on an app given the other apps trialled so far were so were so bad. If I get desperate… I’ll come back and give it a try!

A little lower in the reviews, and their website looks a mess,  but now I turned to Ecto. Couldn’t set it up, had a problem with ‘Access Points.’ When I did finally set it up I couldn’t even work out how to edit a post. FAIL

Macjournal has  lovely website, I’m not sure why I didn’t try this earlier. But after using it I can now see why it has bad reviews. I couldn’t get past ‘incorrect Username or password’ problem. Gave up after 20 min of trying and many google searches revealing others had similar problems. When I finished I couldn’t even quit the app! Massive Fail

So I became desperate and decided to give ‘Desk’ a go. $29 from the App store. Surely if it’s on the Apple App stoire it should work. WRONG!  It’s better than the other offerings but not reliable enough to use. There’s goes $29.

After reading the blog at ‘Desk’ especially the bug reports ‘http://talk.desk.pm/c/bugs/general-bugs’ it seems that desk has some problems that are being worked on.

Overall I’m not recommending any of these blog publishing apps, even the free ones. For the moment it seems it’s best for bloggers to stick with publishing directly to WordPress.

How to write a simple blog

How to publish your own wordpress site (Advanced)

How to secure your WordPress website with https with SSL

How to install a WordPress development version locally on OSX Mavericks

How to use Amazon Cloudfront to speed up your wordpress site. 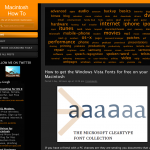