How to bulk print pdf files in alphabetical order 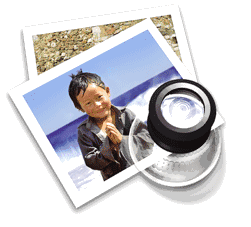 This might be a bit obscure, but if you ever need to do it then this will save you a lot of time! Today I had 33 separate pdf files that I wanted to print out.  I wanted them all printed out in alphabetical order. It took me 3 attempts.  Here is how to get them to open in Preview in alphabetical order first go so you can print them in bulk.

I was trying to print off six music books for church.  I have 33 songs all in one folder. They are PDF files.  In my first attempt I simply selected all the songs and pressed Apple-P for print.  Now this kind of almost worked: all the files printed, and they printed in the right order, but for about half of the files the top of the name was chopped off. For some reason when you use the Apple-P shortcut to print directly from the Finder, it can chop off the top of the PDF file when it prints.  I think this is because when you use the Apple P shortcut  it doesn’t check to see if the PDF file goes outside the margins, and it doesn’t use shrink the page if it does.

My second attempt: Open into Preview from the desktop.

My second attempt was to select all the files and then double-click them to open them in Preview.   So I selected all the files in the folder, it was in list view so they were all in alphabetical order, but for some reason the files opened into two separate preview windows, 13 in one window and 20 in the other window and it seemed to be a bit random as to which ones went into what window. This was no good because although each window was in alphabetical order within itself the files were spread across the two preview windows so I couldn’t print thermal at once.

My third attempt – Open from within the preview application itself.

My third attempt worked. Here is how I did it.

Then I went to the file menu and selected open:

Now in the window that opened I went to the folder that all what my songs were in. 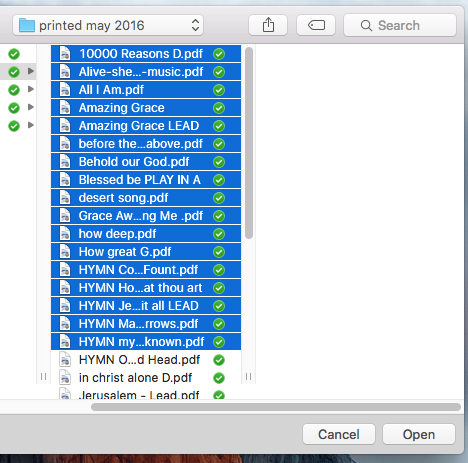 I clicked on the top item, then to select all the items I simply had to press shift and click on the bottom Item and they were all selected. Then I clicked ‘Open’ and all the songs opened into a single preview window and they were all in alphabetical order. Exactly what I wanted!

Now I could just select Print and the PDF files were printed in alphabetical order.

This would be a great way to combine PDF files in alphabetical order too. Instead of selecting print, select print and then in the bottom left corner of the print dialog select ‘pd’f and choose  ‘print to PDF’.

How to print a PDF booklet.

How to copy a font

How to print a pdf booklet in OS X Mojave.

Can you get Microsoft Publisher for an Apple computer?

How to type the copyright symbol “©” on a Mac