I almost got hooked by a facebook scam today.  This is not strictly Macintosh but it’s computer related. 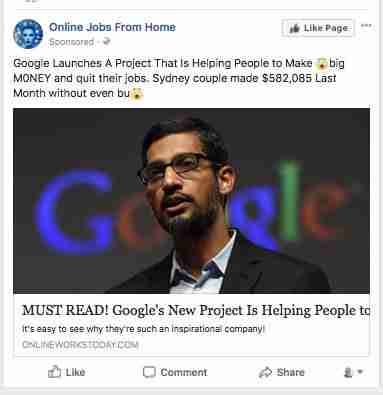 Ad for ‘cryptogps’ on facebook claims it is backed by ‘Google’.

I was taken to this ‘CNN’ News site… 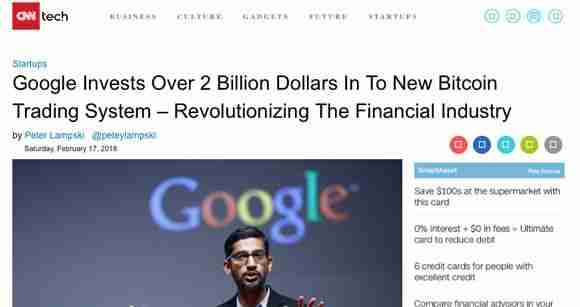 I think I subconsciously saw the CNN News logo, and the URL was not crazy enough to flag me that it was a fake one (onlineworkstoday.com).

The article was actually interesting. All about how little people are unable to trade on the Stock market because all the big players set limits to keep them out. Google wants to help that.

It’s even an ethical program…

“Recently, Google CEO, Sundar Pichai has confirmed that Google…has invested in the financial tech, Crypto GPS Auto Trading System, which was designed with the intent of shifting global wealth away from the world’s richest 0.1% and towards the common everyday people of the planet.”

Needless to day the more you go on the more scummy it gets, it want’s your money up front, and it’s a well set up scene. I’m sure a lot of people will be taken in by it. So Im just posting this in case anyone comes across it.

Interesting that already the name of the scam has changed from CryptoGPS to BitCoinWelth. The tweet now reads like this:

This reminds me of the clever Apple Support Scam that I wrote about here.

Apple have lost more than their display.

news No Comments »
Copyright © 2013 Wayne Connor. All rights reserved. | Hosted on bluehost.com Click here to find out why.