Getting Started: The Apple Key

I thought I ‘d kick off the year with a little series for new mac users, help out those people who got a Mac for Christmas! Lesson # 1 – The Apple key (also called the command key or

key) is used for keyboard Shortcuts.Shortcuts

A keyboard shortcut is when you press a key to do something that you could do another way, but the shortcuts is quicker, hence the name shortcut! The Apple key is the key that tells the computer – ‘Hey, I want to do a shortcut!’

Here are some examples, give them a try now so you can see how they work:

Apple P = Print – use this from within most programs – Pages, Mail, iPhoto etc – to print to the printer.

Apple S = Save your document

Apple Q = Quit the program you are in.

Apple W = Close the window you are in, but keep the program running.

Apple Z = undo. This will undo your latest typing in most programs.

Apple SHIFT 4 = (hold down the three keys at once) take a photo of part of the screen!

As well as these ‘universal’ Apple shortcuts there are some shortcuts that are specific to programs. The best way to find them is to look at the menus at the top of the screen. For example, in Safari, look at the ‘File’ Menu: 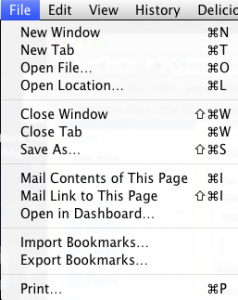 The shortcuts are listed after the menu item.

Apple + T will open a new browsing Tab and so on.

If you’ve moved from a PC, the Apple key is a little like the control key, except that Apple Key is only used for Keyboard shortcuts.

The Apple still has a Control Key, a Shift Key, and an Option key – but none of these do shortcuts. They are all used to MODIFY the behaviour of something. For example, the shift key modifies letters by making them uppercase. The control key modifies the mouse click to make it a left-click. (Try clicking the mouse while you hold down the control key – give it a go now)

It may be the case that you sometimes need to use another key for a shortcut – see the Safari example above where the SHIFT Key (represented by the Up Arrow) modifies a shortcut. So Apple S = ‘Save’ but SHIFT Apple S = ‘Save As’

In Summary the Apple key is the key that is used for keyboard shortcuts.

Shift, Option and Control are used to change what something does.

Getting Started: The Control Key

Getting Started: Connecting a Printer to a mac

Do this BEFORE you lose your mac!

How to bookmark lots of tabs at once in safari

Login to your mac automatically without having to type a password

How to import photos from an SD card 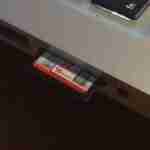 Do this BEFORE you lose your mac!

How to sell something on ebay 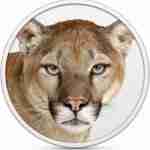